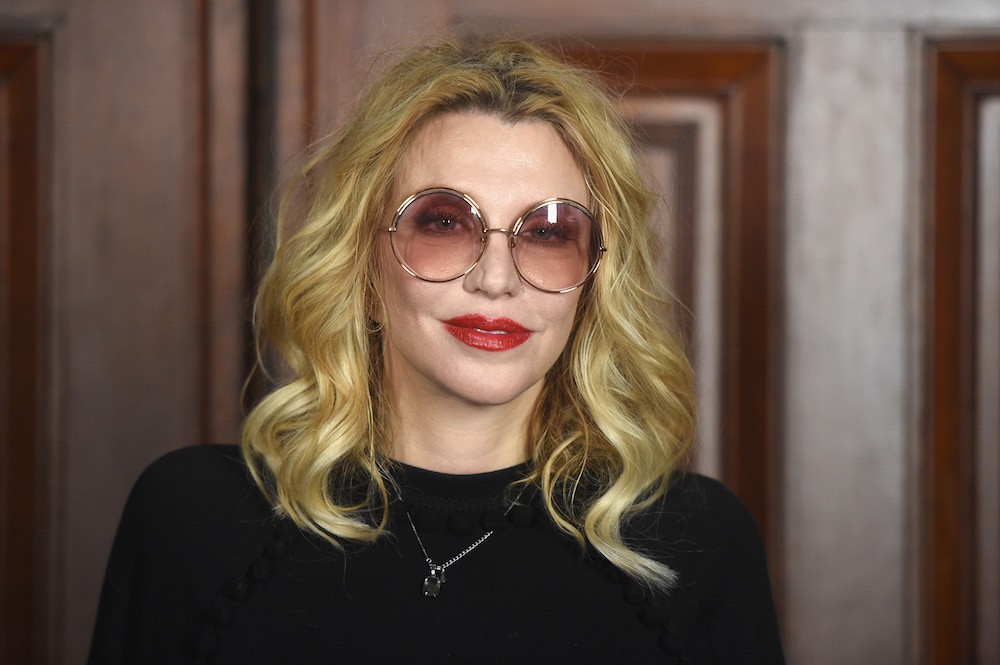 Courtney Love: not fucking that guy, not getting a dog she doesn’t want, not putting on weird smooth jazz. The Hole frontwoman and icon of the ’90s is the subject of a new Interview magazine feature, in which she answers 20 questions posed by her famous friends, a group that includes Lana Del Rey, Michael Stipe, Kris Jenner, Gwyneth Paltrow, and others.

Celebrity-on-celebrity “interviews” like this tend to largely involve meaningless exchanges of compliments and platitudes, but this is Courtney Love, so instead she says stuff like this:

DEL REY: I have another one: Is the environment in which you create important to you, or are you thinking up projects no matter where you go? Lana

LOVE: I very much believe, especially as a Buddhist, that my environment 100 percent reflects what I’m putting out. About eight months after my cessation of all nicotine and all mood- or mind-altering substances, my environment has changed so radically and in such great ways. I feel like I’m gonna do what pleases me, and if it doesn’t please me I’m not doing it. I’m not fucking around with things that don’t make me happy. I don’t need to put on weird smooth jazz, because I don’t like it. So fuck it. I’m not getting a dog I don’t want. I’m not gonna fuck that guy. I just don’t want to.

All of her answers are a pleasure to read, providing what seems like a glimpse at the real humanity of a woman who was often reduced to a caricature by the media in her heyday. In her answers, she comes across as reflective, chatty, literary, wise, brash, extremely funny, like a total nut: the sort of person you’d cherish spending time with— especially if it involved, say, getting fancy massages while watching a shitty movie like The Dirt, a scene Love vividly describes to her pal Kris Jenner:

KRIS JENNER:What’s your favorite thing to do with your girlfriends?

LOVE: I recently had three girlfriends over and we sat on my epic Majorelle art nouveau bed. My Rolfer came over to do his thing. We don’t call it massage—they get so pissed off, the Rolfers do. He does deep tissue bodywork on ladies. We watched the dumbest Netflix film ever called The Dirt[a biopic about the band Mötley Crüe]. It’s so stupid and vile about women, and just fucking dumb. It was super fun to groan together. We had jasmine tea. We all got our bodies worked on and watched this white rapper named Machine Gun Kelly, and we just made jokes. I was like, “When’s Ozzy gonna snort the ant?” Then, within seconds, he snorted the ant. Then the Nikki Sixx character was like, “I have a new girlfriend. She’s sweet. She’s wonderful.” I was like, “And her name is heroin.” Two seconds later: “Her name is heroin.” I was killing it.

Speaking of Jenner, Love uses a question about her ideal woman from Hari Nef to speak at length about a “Venusian fertility cult in the Valley,” which Interview’s editors helpfully explain is a reference to the Kardashian family. She tells amazing Liz Taylor stories to Michael Stipe, finds multiple excuses to bring up Ariana Grande, and admits to Debbie Harry, “I don’t know who Juice WRLD is.” And when Marilyn Manson, in typical desperate-to-provoke fashion, asks about her sex life, she shuts him down with aplomb:

MARILYN MANSON:Who was your most memorable sexual experience?

LOVE: Somebody told me that in the Ariana Grande song I listened to this weekend, she names her exes or something. Is that true? Please, next, or whatever. I didn’t hear it. There’s this sport thing with girls like Tay Tay and Ariana, where they go out with famous guys and then sing about them, which of course I used to do, too. But it wasn’t as much of a sport back then. Actually, no. Forget it. I’m not fucking answering this shit.

The entire feature is very much worth your time. Find it here.