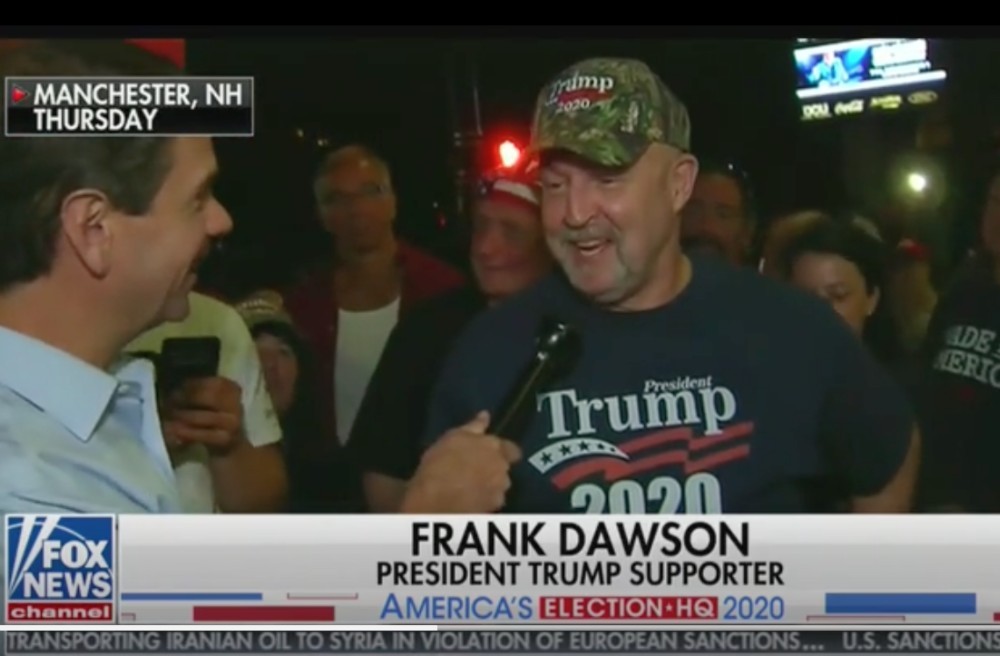 President Donald Trump mocked a supporter he mistook for a protester, calling the man “fat” in front of the thousands of people in attendance at a MAGA rally on Thursday, August 15, in Manchester, New Hampshire.

Fox News correspondent Griff Jenkins caught up with the Trump fan, named Frank Dawson, who says he has no ill will toward the president. This, after Trump said in front of an entire rally crowd: “That guy has got a serious weight problem. Go home, get some exercise! … Got a bigger problem than I do. Got a bigger problem than all of us. Now he goes home and his mom says, ‘What the hell have you just done?’”

Trump made the remark as a group of protesters from the rally were being escorted out of the venue, and he assumed Jenkins—in a Trump 2020 T-shirt—was one of the demonstrators. As Bloomberg White House correspondent Jennifer Jacobs noted, the protesters were actually quite svelte, but the Trump supporter who called security on them was “a big, broad-shouldered guy.”

Here’s footage of Trump body-shaming one of his supporters to the delight of the crowd.

Trump mocks a protester at rally, says: “That guy has got a serious weight problem. Go home, get some exercise.”

Vox reporter Aaron Rupar also pointed out that when Trump finished body-shaming his own supporter, he returned to his prepared remarks in which he described the MAGA movement as one “built on love.”

Incredible: mere seconds after he demeaned a protester for being overweight, one of the very first things Trump read from the teleprompter was “our movement is a movement of love.” pic.twitter.com/it5bNh75td

On Friday morning, the president’s favorite TV show Fox & Friends aired an interview with Dawson, who appeared to be completely unbothered by the president’s behavior. Dawson confirmed to Jenkins that Trump was actually talking about him.

As Dawson tells it, Trump “didn’t see me rip the signs away from those three people sitting near us. They were trying to cause a ruckus and they jumped up and started yelling. I don’t care what they were yelling.” He added: “It wasn’t going to happen besides me. I’m trying to listen to my president. I think he thought I was part of it, but I wasn’t—I was the good part of it.”

When Jenkins asked what Dawson thought of Trump’s comment about the MAGA booster’s alleged “weight problem,” Dawson made it clear that his hero can apparently do no wrong in his eyes.

“Everything is good,” Dawson said. “I love the guy. He is the best thing that ever happened to this country.”

Trump must have skipped his daily Fox & Friends viewing this morning, because as New York Times reporter Maggie Haberman tweeted, Trump left a voicemail for Dawson claiming that he was body-shaming someone else.

Trump told the man it was the president calling, that he wasn’t talking about him when he fat-shamed someone, and thanked him for support, per Trump aides. https://t.co/YcCz0SU3gN