Joe Biden Was an Incoherent Mess During the Third Democratic Debate 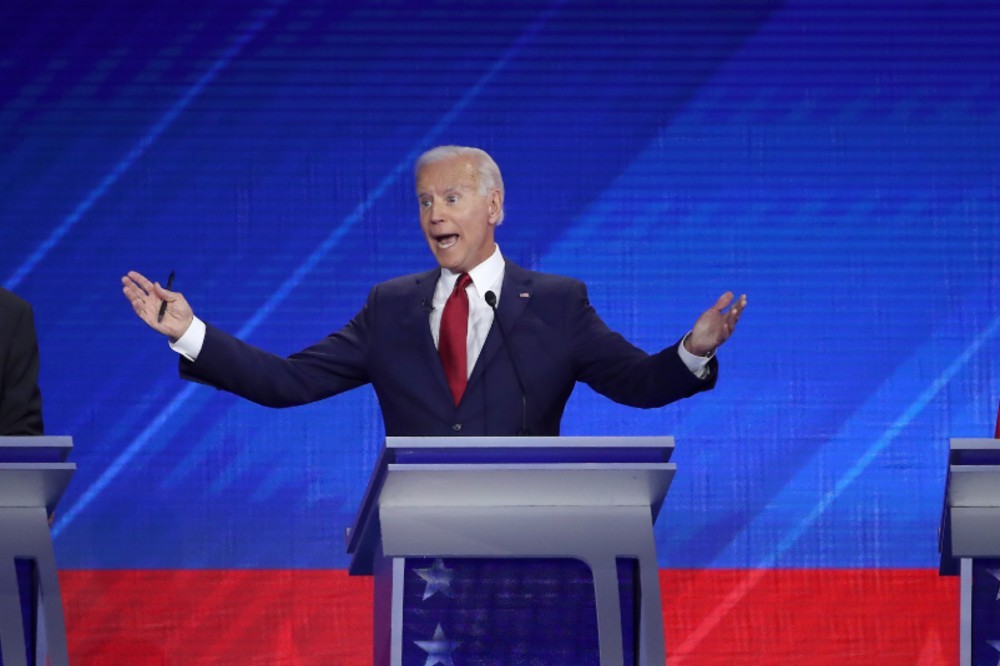 Although former Vice President Joe Biden is still somehow holding on to a tenuous lead in the polls, his performance in the third Democratic presidential debate doesn’t bode well for the rest of his candidacy. Throughout the relentlessly interminable event on September 12, Biden seemingly had trouble remembering other candidates names and gave multiple incoherent answers to straightforward questions. At times, it also looked like he was straight up trying to prevent his dentures from fleeing his mouth.

While tearing into Sanders’ Medicare for All proposal, Biden suffered a hell of a slip of the tongue (or in his case, teeth) when trying to explain why his own “Medicare for choice” alternative is supposedly superior to just giving universal healthcare to every American, regardless of employment status, income, or need.

“Everybody says we want an option. The option I’m proposing is Medicare for choice,” Biden said. “If you want Medicare, if you lost the job from your employer you automatically can buy into this. You don’t have … No pre-existing condition can stop you from buying in. You get covered, period. And if you notice, nobody’s yet said how much it’s going to cost the taxpayer. I hear there’s large savings.”

While gesturing toward Sanders, Biden stumbled and called him “the president” before realizing what he said and pivoting to “my friend from Vermont.”

While explaining his incoherent Medicare for Some plan, Biden used the phrase “buy in” to describe how people can opt into a health-care plan should they lose their job, and thus, their employer-provided insurance. As Julian Castro debated the merits of Biden’s proposal, the former Obama HUD secretary took what many criticized as a below-the-belt shot at the former veep’s age.

Biden countered with “they do not have to buy in,” despite having used those exact words in a previous answer. Here’s how that played out:

When Biden’s Team Had to Make a Correction⁠—Yes, Really

Biden said that no one should be in jail for a non-violent crime, and then his team immediately had to walk it back, clarifying that he meant drug-related violent crime. It’s not a good look when your campaign has to explain your answer in real time because you’re not making sense on live TV.

Also, let’s not kid ourselves, Biden has been very outspoken about how he loves to jail non-violent drug offenders.

Per a Biden aide, he meant for non-violent drug related crimes https://t.co/V138zmFGH6

A Teacher in Heaven?

While attempting to answer a question about institutional racism, Biden gave a rambling answer that sounded like he was reading randomly arranged pieces of fridge magnet poetry. He had this to say as he discussed educational inequality:

We need, we have one school psychologist for every 1,500 kids in America today. It’s crazy. The teachers are—I’m married to a teacher, my deceased wife is a teacher.

According to The New York Times, both Biden’s current wife Jill Biden and late wife Neilla Hunter worked as teachers, but in Hunter’s case, the use of present tense is a little odd. Is she teaching in the afterlife?

Whatever This Word Salad Means

This is from the same answer that the teacher quote above came from. If you can figure out what he’s saying about record players or whatever, congratulations, you’re now Biden’s new campaign manager. This is legally binding. Sorry, we don’t make the rules.

It definitely wasn’t Biden’s best night. But who actually did well? Vote in our poll.

Jennifer Lopez Checks In From Vacation With Sizzling Swimsuit Photo

Maren Morris Speaks Out About Struggle With Postpartum Depression