Thom Yorke: Americans Have a Chance to Push Donald Trump “Off the Cliff” With Impeachment 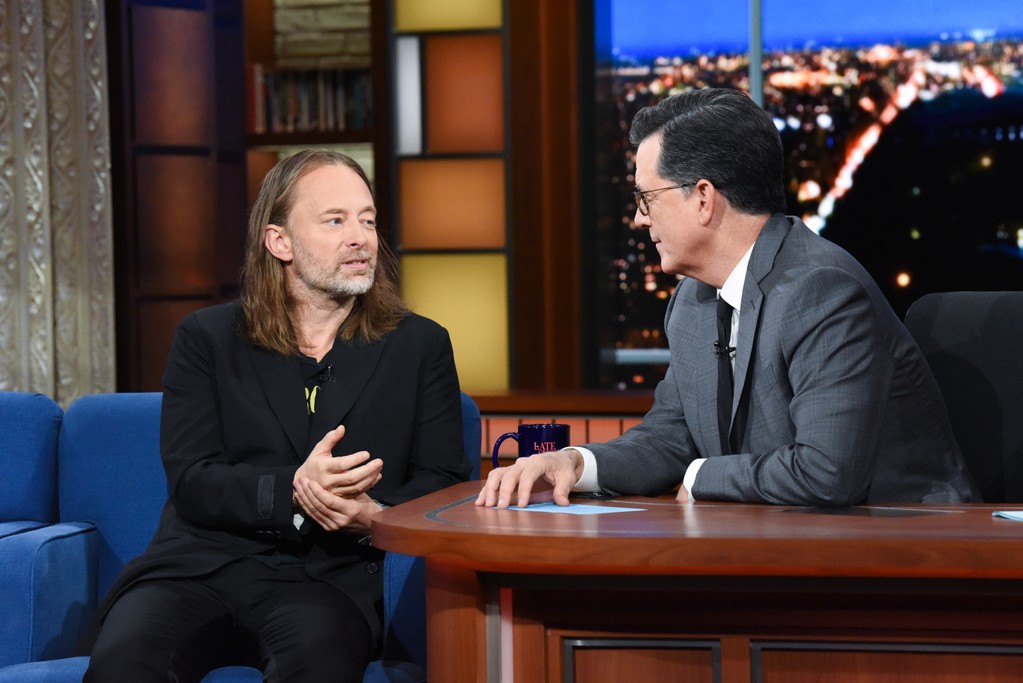 Thom Yorke isn’t one to keep his political opinions quiet, and he shared them once more during his appearance on The Late Show With Stephen Colbert on Tuesday, October 1, during an interview that spanned various topics.

When Colbert noted that Americans “were glad” to see the mess that is Brexit because the U.S. has “really screwed the pooch over here,” the Radiohead frontman pointed out that what’s happening here may not be as bad as what’s going on across the pond.

“You have at least a chance to get … push him off the cliff, just him,” Yorke replied, referencing President Donald Trump and the impeachment inquiry launched by Nancy Pelosi.

“Yes. We’re tied to these guys, they’re tying us up, and they’re going to take us off the cliff with them,” added Yorke. “And as they do it, they’re saying it’s the will of the people. So it’s … disturbing. We live in strange times. It’s not my fault!”

He also discussed writing music that the comedian described as “uneasy and anxious” about society and government.

“I wasn’t thinking about the future. I guess I was looking at what was happening at the time,” the Radiohead frontman explained. “I think it’s more overt now. I felt like everything I was talking about was there when we wrote the album Hail to the Thief. That seemed pretty bad, that period of time, when Bush Jr. got in. And now we’re here. It seems to have spread to our country as well.”

“We’re in a position where the prime minister has lied to the queen. That’s apparently not so cool, but nothing’s being done about it,” Yorke added about Boris Johnson, who has denied misleading Queen Elizabeth II to suspended parliament. The U.K.’s supreme court ruled that Johnson had acted unlawfully. “Apparently, she was asking her aides if she could get rid of him! … It’s so crazy at the moment.”

As for whether he’ll ever be knighted, as fellow musicians Mick Jagger, Bono, Sting, and others have, Yorke doesn’t think it’s likely, thanks to his outspoken ways.

“I think I’ve blown that chance. I think when our current glorious leader got in, I put in an offensive enough message. … I’ve got no chance now,” Yorke responded. He had tweeted after Johnson’s election in July, “Fuck You ‘Prime Minister…’” along with an old letter from Johnson’s teacher criticizing the now prime minister’s bad attitude as a teen. He wasn’t too kind to former Prime Minister Theresa May either, comparing her policies to Nazi Germany in a February tweet.

While Yorke spent a good chunk of his interview talking politics, he did discuss his third solo album, Anima. (Not to be confused with Tool’s Ænima.)

“I found it in my notebook,” he told Colbert about how he came up with the title. “It was a pretty word. I liked the word. … In Jung, it has various definitions. It’s used in Italian to refer to the soul, and my partner’s Italian, so I think I probably heard her saying it and looked into it.”

Yorke also tied the idea to technology and dreams. “I liked the idea, principally, that we all have our own little animas, we all have our own little black mirrors—our phones—and we send our little animas out to communicate,” he explained. “To me, it’s sort of an expression of some sort of weird dream state that we’re currently finding ourselves in, where reality seems to be moving in a different direction.”

“So the animas are little bits of our spirit …,” said Colbert.

“On a spiritual level, that,” Yorke affirmed. “And on a more grotesque level, your Twitter persona.”

Spotify Stock Downgraded by Citi, as Podcast Competition Heats Up