The 40 Greatest Metal Albums of All Time 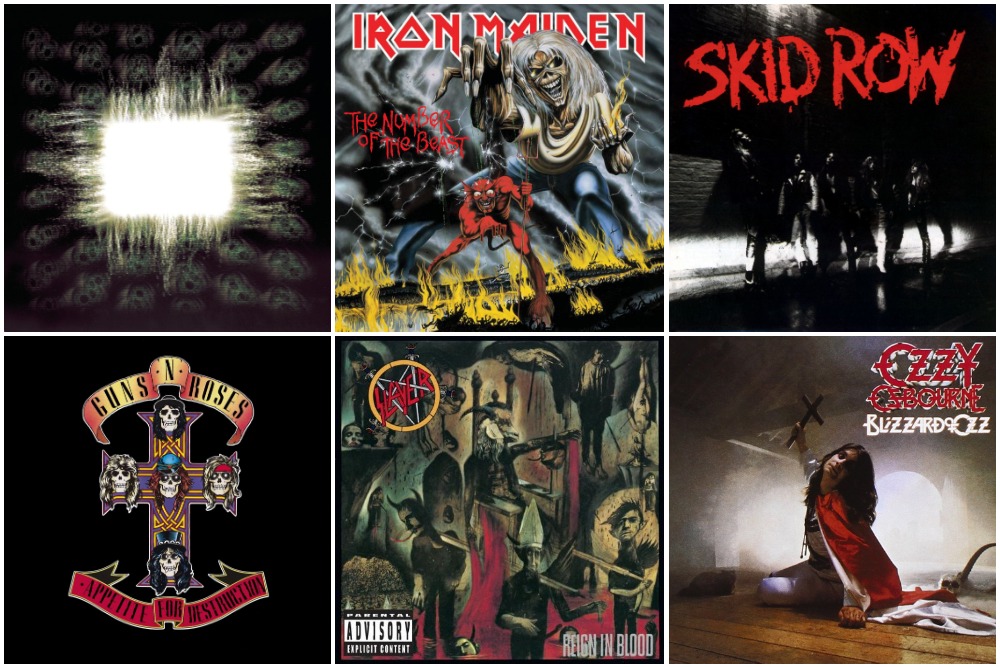 This article originally appeared in the September 2002 issue of SPIN.

From Black Sabbath to Korn, here is the definitive list of records to break your mother’s heart (unless your mother happens to be Lita Ford).

The first rap-metal icon who actually seemed to like metal, the pyrotechnic, dwarf-tossing, greasy-cheese-burger-guitar-solo sense of the term. (Fred Durst’s love of Tool doesn’t count). The Kid kicks outlaw clichés like he invented ‘em on the slow-ridin’ hit “Cowboy,” but the real pimp-ring gem is “Only God Knows Why,” where the American bad Ass flips everybody the “Freebird.”

Second album from L.A.’s finest Armenian-American metal band. Singer Serj Tankian trips out on the joys of jumping around and the mysteries of jet pilots smiling over the bay; the band slams no-nonsense riffs into half-remembered melodies that make them sound like Sepultura from the old country. A bout instrument that still cuts like an X-Acto.

35. Ministry – The Mind Is a Terrible Thing to Taste

On which heroin cowpoke Al Jourgensen ditches ’80s death-disco for self-destructo industrial metal, a sound somewhere between chocking the chicken and strangling an android. Songs like “Burning Inside” and “Thieves” administer DIY tonsillectomies; the grinding dirge-dunks “Never Believe” and “Cannibal Song” are Black Sabbath for the Sega Age.

On their major-label debut, these L.A. ozone-layer-depleters give Cheap Trick’s glitter-cannon pop craft a Dumpster-diving makeover. “Round and Round” and “In Your Direction” are the kind of swashbuckling doofus-metal anthems Dirk Diggler from Boogie Nights was too stupid to write; Ratt’s Stephen Pearcy is just stupid enough.

Producer/metal tastemaker Rick Rubin brings out the bell-toned tenor of former Misfits and Samhain vocalist Glenn Danzig, not to mention his wounded heart. A burly torch singer undone by his sympathy for the devil, Danzig channels Roy Orbison on “Tired of Being Alive”; “Long Way Back From Hell” hollers the blues from the lonely end of AC/DC’s highway to you-know-where.

Diamond Dave’s first solo album is actually the last great Van Halen album: disco-metal in the epicurean spirit of Diver Down, mathematically shredded by guitarist Steve Vai and blasted by Roth’s elephant gun. Dave butchers “That’s Life” at the end, but it makes perfect, beautiful sense—if he’s not the hair-metal Sinatra, who is?

Recording on the shores of Switzerland’s Lake Geneva, these hollow-eyed British stoners shred (occasionally), boogie (intergalactically), show off their huge organs, and contribute thoroughbreds like “Highway Star” and “Smoke on the Water” to classic rock’s table of warhorses. Moral: It’s all fun and games until “some stupid with a flare gun” burns down the Swissötel.

How bleak is this needle-and-the-damage-done song cycle? Let’s just say the most hopeful song is about the Vietnam War. Ten years before finally succumbing to heroin addiction, singer Layne Staley scratches out the rough draft on his epitaph; skimming grunge mold off a Southern-rock bog, guitarist Jerry Cantrell proves an able pallbearer.

Jon Bon Jovi had it all—dreamboat looks (or great teeth, anyway), brilliant anthems (“Wanted Dead or Alive”), semi-decent anthems (“You Give Love a Bad Name”), makeup music for eighth-graders (Livin’ on a Prayer”), and a guitar player who wanted to be a cowboy (Richie Sambora). No wonder that Jersey sumbitch was always smiling.

Back when Chris Cornell was Seattle’s finest hair farmer and Kim Thayil was America’s smartest Ace Frehley disciple, Soundgarden were—despite their protests to the contrary—a metal band. The arena-rock vocals on Badmotorfinger sound like Ozzy (or maybe Steve Perry!) at the Fillmore East, but the gnarled guitar licks pounce like leather-clad Sasquatches.

Debut of the Ozzy and Sharon show, in which the Prince of F*&@ing Darkness (Ozzy) and the future present of Dead Guitar Heroes of America (Randy Rhoads) snort a batch of Womble dust, attempt to make a straight pop album, and accidentally invent speed metal.

Like Space Mountain with a big frizzy wig on, 1984 is the pinnacle of ’80s Ferrari-rock excess. Eddie shreds AstroTurf, Alex pounds plutonium, Michael orders another Jack and Coke, and Diamond Dave announces his intention to make mad passionate love to the entire continent of North America. And that’s just during “Jump.”

24. Iron Maiden – The Number of the Beast

The introduction of Bruce Dickinson as Satan’s howling mouthpiece defined the new British metal aesthetic—no gloss, no girls, two guitar players going for Baroque. What made Maiden seem Spinal Tap-ish was also what made them (arguably) the most influential metal act of the ’80s—they were pretentious, but their pretensions made them aim higher than anybody else.

The problem with writing about Queens of the Stone Age is that there aren’t enough synonyms for the word “heavy.” And Josh Homme’s black-hole guitar tone—constantly expanding and contracting, like an iron-studded blowfish—seems to require every one of them. If you triple-majored in biochemistry, horticulture, and philosophy, this is your metal.

The best ’60s power trio that didn’t feature a guy named Hendrix or Clapton. Guitarist Leigh Stephens, singer/bassist Dickie Peterson, and drummer Paul Whaley churn out louder-than-God lava rock that melts down everything from rockabilly (hit cover of “Summertime Blues”) to blues (“Rock Me Baby”). Proto-metal, but also the birthplace of grunge.

20. Poison – Look What the Cat Dragged In

“You gotta cry tough,” Pennsylvania pretty-boy Bret Michaels informs us right up front. By which he means that girl metal is twice as stupid and ten times cooler than boy metal and that talking dirty in your old man’s Ford is what rock ‘n’ roll is all about.

No one merged punk velocity and metal atrocity quite like these British biker thugs. Of their 932 albums, this two-disc best-of offers the most trounce to the ounce: ashtray-licking blues riffs, Lemmy Kilmister’s “Macho Man” Randy Savage bellow, those dive-bombing double kick drums. They looked like warthogs, but, God bless ‘em, they rocked like warthogs, too.

Eventually, they got their own roller coaster (at Disney-MGM Studios theme park). Here, these Beantown malcontents are their own roller coaster. While his loose-limbed band bolls Led Zeppelin, the Rolling Stones, and the New York Dolls in dirty Charles River water, Steven Tyler sings and wriggles like the Stones’ logo come to lustful life.

The final curtain for singer Bon Scott before he choked on his own vomit. Raw but not sloppy, sex-starved but not sexist, this is the last AC/DC effort that feels like the work of extremely talented shop students.

12. Rage Against the Machine – The Battle of Los Angeles

Page and Plant meet Chuck D and Flavor Flav. Harvard-educated guitarist Tom Morello twists riffs till his scales of justice squeal like wheels of steel; Zach de la Rocha chases ghosts through El Norte’s killing fields, winds up a raving loco on a street corner in the city of dreams, gets to the end of his rope, and finds a noose.

Per the liner notes, Shout was recorded on “Foster’s lager, Budweiser, Bombay gin, lots of Jack Daniel’s, Kahula and brandy, Quackers and Krell, and wild women!” “Krell” is Crüe-speak for cocaine, which might explain why the band dressed like sexually confused Decepticons while shouting in the general direction of Lucifer. Not particularly heavy, but hard; Dave Grohl in ’91 was basically Tommy Lee in ’83.

With grunge in its death throes, these stinky-fingered Hollywood gnomes revived: a) the two-song LP side (what, you bought it on CD?); b) the acerbic ranting of deceased comedian Bill Hicks; and c) labyrinthine, proggy-assed concept albums. Singer Maynard Keenan gives Rollins-style angst a Robert Smith makeover; guitarist Adam Jones steers art-thrash over the dark side of the moon.

Every hipster claims to adore Alive!, but this sequel captures Kiss at the height of their kabuki powers, incinerating “Detroit Rock City” and “Calling Dr. Love” like dinosaurs from the planet Lovetron. Hirsute frontman Paul Stanley has said that this double LP is “as live as it needs to be,” which probably means “not very.” But who digs Kiss for their integrity?

Before metal was metal, it was everything else. Jimmy Page’s expressway-to-Stonehenge breakdown on “Whole Lotta Love” is a freight train to No Wave; “Heartbreaker” beats Sabbath to sludge by a year; “The Lemon Song” pulls Moby’s break-beats-and-field-recordings trick 30 years early (no Pro Tools, so John Bonham just belts Robert Plant in the ‘nads till the juice runs down his leg); and “Moby Dick” still kicks the Melvins’ asses.

California surf-rock for kids in Nebraska who wanted to run away to New Jersey, Van Halen was metal as universal pop—loud (but not too loud), fast (but not too fast), heavy (but not too heavy), and funny (at least on side 2). David Lee Roth sings like he’s trying to nail your kid sister (which he is), and the rhythm section is almost robotically perfect. Oh, the guitar player ain’t bad, either.

Producer Mutt Lange gives Angus Young’s Zen-perfect riffs a platinum sheen, and pub-primed singer Brian Johnson ably fills the late Bon Scott’s trousers. Every song shrieks pure meathead rock, but for three and a half flawlessly lewd minutes, “You Shook Me All Night Long” makes being a meathead the acme of sexy cool.

They sounded way scary, but Sabbath were really just working-class yobs from Birmingham, England, who acid-tripped over the formula for Pure Evil Rock and figured writing doom-saturated anthems about war, fairies, and robots beat punching a clock at the steel mill. On Paranoid, Tony Iommi’s guitar and Bill Ward’s drums wrestle in the mire, Geezer Butler’s bass simulates a herd of iron men trampling the countryside, and Ozzy’s bad-mood-rising bellow blots out the sun.

Led Zeppelin’s fourth studio album—1971’s unnamed “Zoso” (so called for the enigmatic symbols on its cover)—is the most famous hard-rock album ever recorded, not to mention a watershed moment for every grizzled old man who’s ever carried a bundle of sticks on his back. “Zoso” is not Zeppelin’s best album (Houses of the Holy) or their heaviest (Physical Graffiti) or even their “most metal” (Led Zeppelin II). However, it’s the defining endeavor for the band and the genre it accidentally created. Epic, ethereal, and eerily sexual, “Zoso” is the origin of everything that sounds, feels, or even tastes vaguely metallic, except maybe Metallica and that metal sludge from Scandinavia (which derives from Black Sabbath’s Vol 4).

The singer is a paranoid redheaded Midwesterner with an eight-octave throat and a white leather suit, and he’s too cool to realize he can’t dance. The longhaired guitarist plays blues/metal/punk/jazz/thrash riffs at Keith Richards’ pace; the shorter-haired guitar player smokes cigarettes and gets in fights. The bass player is from Seattle, before it became cool. The drummer thinks he’s in a disco band. And it all sounds like Hollywood at 2 a.m., only genuine and dangerous and absolutely necessary.

Which metal album do you think is the best? Tell us on our Facebook page.